The IBRL has a long history, with discussions about a bio-center at Illinois dating back nearly 20 years to when David Chicoine was Dean of the College of ACES.  Early plans included the creation of a biorenewables facility, with an outline provided by Dr. Steve Eckhoff.

In 2006, with urging from industry leaders, trade organizations, and state government, the University of Illinois Strategic Plan called for the University to “take the lead in the State of Illinois in the area of sustainable energy production and consumption.” This directive included the “Formation of an initiative that brings together scientists from different institutions in Illinois to work together in order to solve multi-discipline-based problems in sustainable energy.” The Center for Advanced BioEnergy Research (CABER) was formed and then ACES Dean Bob Easter asked Dr. Hans Blaschek to serve as the first director.

In 2007, the state appropriated $3.2M for the planning of the Integrated Bioprocessing Research Laboratory.  By 2008, the current location of the building had been decided, and conceptualization of the facility began.  In 2009, CABER accepted its first cohort of Bioenergy Professional Science Masters (PSM) students, and by 2011, had started renovating a temporary laboratory facility known as the CABER Bioprocessing Laboratory (CBL).

The CBL renovation was completed in 2012, allowing CABER to start running small projects for companies, and begin offering seed grants in partnership with the ACES Office of Research. 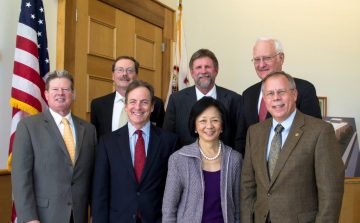 Full funding for construction of IBRL was approved, and the groundbreaking was held in October 2014.  The Illinois state budget shutdown halted construction for 16 months from July 2015 through November 2016, and again for 6 weeks in July 2017.

In 2016, CABER officially changed its name to IBRL and moved to the Department of Agricultural & Biological Engineering.  Dr. Vijay Singh was named Director after serving as Associate Director of Engineering since 2011.

Construction was completed in May 2018, with the formal Grand Opening held September 27, 2018.